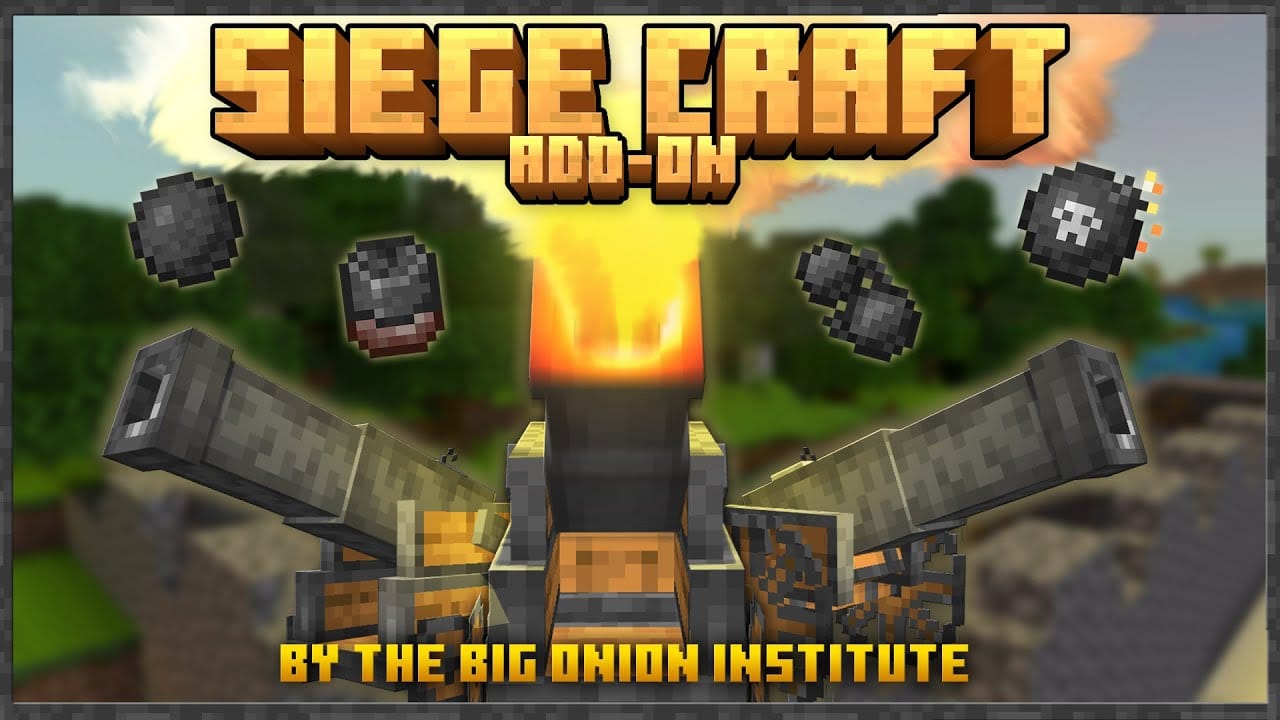 SiegeCraft is an add-on for Minecraft that adds powerful stationary weapons that you can use to crush all who stand in your way! Currently, it adds the Fort Cannon and the Field Cannon as well as almost a dozen different ammunition types, each with their own unique uses and visuals. There is also a bonus ammunition type you can use if you have the Cave update remastered installed. More siege weapons and ammo types are planned to be added in the future, so stay on the lookout!

Currently, SiegeCraft adds two new stationary weapons to the game as well as a plethora of ammo types to go along with them, each with its own unique effects and strengths. There’s also a bonus ammo type you can use if you have the Cave update remastered installed. Every item is obtainable in survival mode and is crafted at the new Siege Workshop.

This addon currently features the cannon as its premier siege weapon. It comes in two variants: The Field Cannon, which you see here on the left, and the Fort Cannon. The Field Cannon prioritizes mobility and flexibility. You can move it around with a lead to quickly reposition the cannon. It can withstand some damage but is mainly meant to be used offensively, not defensively. For example, it would be great to use to attack a nether fortress or an end city.

This is a mainly defensive Cannon and prioritizes defense over offense. This cannon has a lot of health and, as a result, is very difficult to tear down once placed. You can nudge it, however. That way, you can get its position just right after placing. This cannon is designed to defend your base during raids or positions you have previously fortified. It can be moved by boat, however.

Both cannons share the same ammo types and, as a bonus, you can fire yourself out of the cannon when you interact with it, and you’re not holding any ammo. You won’t take any fall damage too!.. Well, as long as you don’t dismount, that is… Just be careful not to jump or crouch while in the air unless you have elytra or something.

This is the siege workshop. It is where you “craft: every item in this SiegeCraft Add-on. I put the craft in quotations because it kinda uses the old trading UI… Since 3D blocks broke recently, I couldn’t use the original model and keep this a block, so I decided to turn it into an entity that acts like a block. It’s honestly hard to tell that it’s not a block, so I’d just ignore that fact. On the bright side, you can easily see all the crafting recipes without having to look them up!

Well, all the crafting recipes besides the workshop itself, that it…

Currently, there are 7 different ammo types for the cannons in the normal version of this SiegeCraft add-on and one bonus ammo type included with the Cave update addon. You can craft all of them at the siege workshop, and they work with both cannons.

The most basic ammo type is cannon balls. They are very cheap and reliable, and probably going to be the rounds you use the most. They deal respectable splash damage and do very high damage with direct hits, high enough to kill a ravage in just three shots.

This ammunition type is no joke. It does comparable damage to normal cannon balls but with much greater splash damage. It can easily take out groups of enemies in a single hit

This is a relatively cheap type of ammunition to produce and is very easy to hit with. It is literally two cannon balls attached to each other by a chain and will spin wildly, giving it a much greater chance to hit. It’s not the most damaging shot in the game, but it is effective against hard-to-hit targets.

Another option for hitting fast or small targets is the Canister Shot. It turns the cannon into essentially a giant shotgun and fires dozens of pellets all at the same time. Each one only does a little bit of damage by itself, but it can deal massive damage close up. It’s also just really fun to fire…

This shot is essentially just a really hot cannonball designed to set things on fire. You can add this one to your arsenal to spice things up.

This shot is another type of explosive round that has the added benefit of detonating when in the proximity of an enemy. This can be really helpful when shooting at phantoms. However, I need to let you know of a technical limitation. For some reason, Minecraft has disabled explosive damage, potion effects, and even damage commands from working on any boss monsters. So that means that, no matter what I did, I couldn’t make this round usable against either the dragon or the wither. Apparently, this is intended behavior for boss monsters, so there’s nothing I can really do about it. I have no idea why Mojang would design in this way.

The wither shot is essentially a superpowered version of the skulls that the wither shoots. It has a massive blast radius and will inflict the wither effect on everything it touches. It’s definitely the hardest ammunition to craft, requiring wither skulls, but is the most deadly…

If you have the Cave Update Remastered installed, you can also craft the glowing goo shell. Due to even more technical limitations, they will need to be made at a crafting table and are made with this recipe. They are very good for lighting up large areas very quickly. It’s kinda like a giant goo shotgun… Never mind, that sounds a little weird…