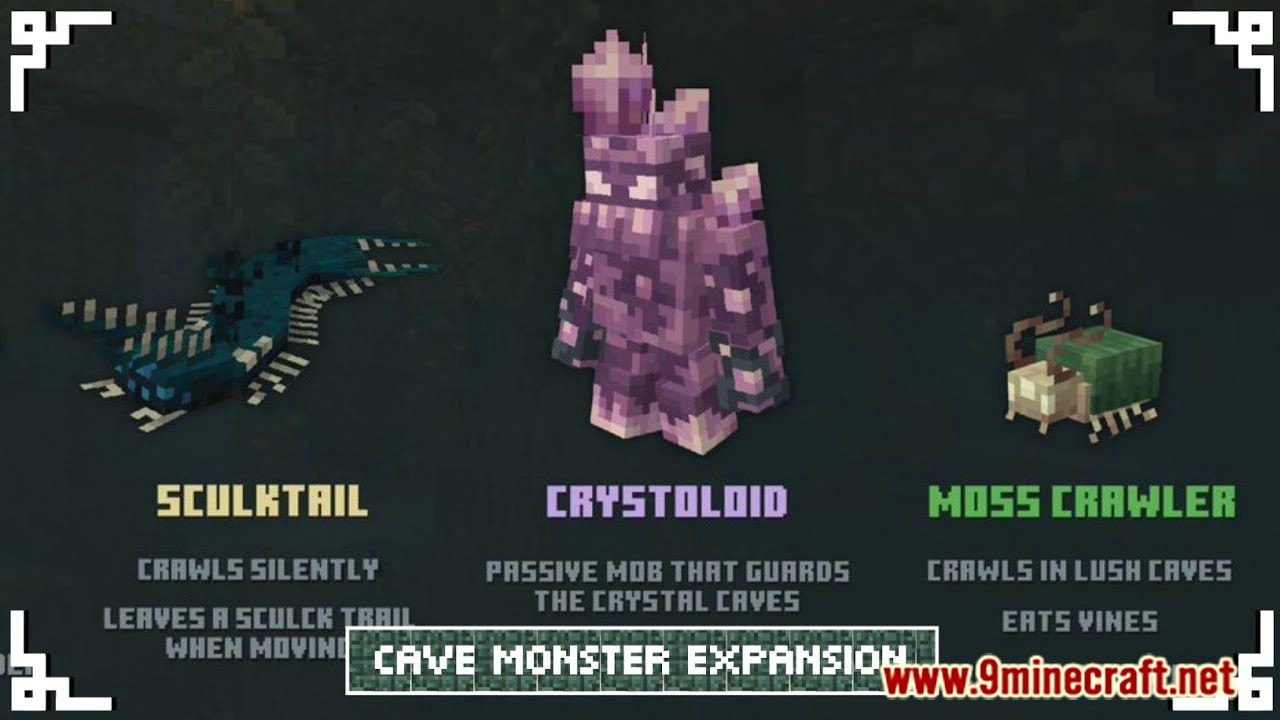 Have you ever felt that Minecraft caves are a bit empty? If so, this Cave Monster Expansion Add-on will completely eliminate this feeling. The Cave Monster expansion is an add-on that adds new functions and features to the game.

On the other hand, we have 12 new items which are indispensable when starting a new adventure, these items will be useful to craft the powerful spear and beetle armor. So that you can take full advantage of the functions of this addon.

In addition, Cave Monster Expansion Add-on also contains new structures, which contain great and useful loot. These structures can be found underneath layer 64

Soul: You can get this item by killing some mobs, to use it press right-click (Windows), hold down the screen for a few seconds (Android/iOS) or throw it on the ground next to you

String Fang: This item is needed to craft the spear, you can get it by crafting it on the crafting table

String Sculk: This item is necessary to manufacture the string fang, you can get it by killing the sculk spider

Fang: This item is needed to make the rope fand, you can get it by killing the sculk spider or the sculktail

Upper Lance: This item is necessary to manufacture the spear, get it by crafting it on the crafting table

Beetle Shell: Necessary to manufacture the beetle armor, get it by killing the beetle

Beetle armor: With this armor, you can get the power of scarab, get the armor by crafting it on the crafting table

Amethyst Sword: Very versatile in close combat, and indispensable in fighting. Get it by crafting it on the crafting table

Lance: The spear is a great combat weapon thanks to high damage, and its ability makes it perfect for defending yourself against your enemies

This lance uses the power of souls to activate its special ability, to activate it you need to be crouching and have more than 10 souls

Special ability: Creates a circular area with a radius of five blakes. All hostile mobs within this radius will receive 1 heart damage every second, for 10 seconds. Projectiles such as snowballs or arrows are stopped the moment they enter the radius of the ability

Damage after each skill: 10

This sword uses the power of the souls to activate its special ability, to activate it, you need to be crouching and have more than five souls

Special ability: Will give you instant health 2 and saturation for 5 seconds

Cost of the souls: 5

Damage after each skill: 5

The third section, dungeons, and mobs

Sculk Spider: The Sculk Spider can be found deep underground, you can find it in mines or caves, but it also has its own dungeon with a big loot inside, this dungeon spawns from layer -64 to layer 0

Sculktail: The Sculktail can be found in the ground, you can find it in the mines or in caves, but it also has its own dungeon that it shares with the sculk spider which contains a large loot inside, this dungeon is generated from layer -64 to layer 0

Beetle: You can find it in the caves, but it has its own structure with 3 beetles inside. Useful if you want to make the beetle armor

Crystalloid: It is a mob that is made of amethyst, you can find it inside the geodes, but you can also find it in the caves

If you like this Cave Monster Expansion Add-on, mcpeaddons more addon for you